Artificial intelligence (AI) has entered the vision of the general public, and we can see many AI-related products in our lives. Such as Siri, AI beauty, AI face change...

Although everyone listens a lot, most people don't understand AI, and there are even some misunderstandings. This article will not cover any technical details to help everyone understand the nature of artificial intelligence.

What is artificial intelligence?

Many people have some misconceptions about artificial intelligence:

We use traditional software and artificial intelligence for comparison, and it is easier to understand with a frame of reference.

Traditional software is the basic logic of "if-then". Humans summarize some effective rules through their own experience, and then let the computer run these rules automatically. Traditional software can never cross the boundaries of human knowledge, because all rules are made by humans.

To put it simply: traditional software is "rule-based," requiring artificially set conditions and telling the computer what to do if it meets this condition.

This logic is very useful when dealing with simple problems, because the rules are clear and the results are predictable. The programmer is the god of software.

But in real life, it is full of a variety of complex problems. These problems are almost impossible to be solved by formulating rules. For example, the effect of face recognition through rules will be very poor.

Artificial intelligence has now developed many different branches, and the technical principles are also diverse. Here we only introduce the most popular deep learning today.

The technical principles of deep learning are completely different from the logic of traditional software:

The machine summarizes the laws from "specific" large amounts of data, summarizes some "specific knowledge", and then applies this "knowledge" to real-world scenarios to solve practical problems.

The above statement is still relatively abstract. Here are some aspects to help you thoroughly understand:

Artificial intelligence is a tool

The AI ​​is the same as the hammer, car, computer... we use, and its essence is a tool.

Tools must be used to be of value, and if they exist independently, there is no value, just like the hammer in the toolbox, no one waving it has no value.

Thanks to Moore's Law, the power of computers has increased exponentially. As long as the computer can disengage, the productivity has been greatly improved, and artificial intelligence has allowed more links to catch the express train of Moore's Law, so this change Is extraordinary.

But no matter how it changes, traditional software and artificial intelligence are tools that exist to solve practical problems. This has not changed.

"Terminator" and "The Matrix"...Many movies have appeared against heavenly robots. This kind of movie gives everyone a feeling: artificial intelligence seems to be omnipotent.

The reality is that artificial intelligence is still at the stage of a single task.

Landline for phone calls, game consoles for games, MP3 for listening to music, navigation for driving...

This stage is similar to a smart phone. Many apps can be installed on one phone and do many things.

However, these capabilities are independent of each other. After booking a flight on the travel app, you need to set the alarm with the alarm clock app, and finally you need to call a taxi with the taxi app. Multi-tasking mode is just the superposition of a single task mode, which is far from human intelligence.

You are playing Go with a friend, and you find that your friend ’s mood is very bad. You could have easily won, but you deliberately lost to the other side, and you still praise the other side because you do n’t want to make this friend more depressed Irritability.

In this small matter, you have used a variety of different skills: emotion recognition, Go skills, communication, psychology...

But the famous AlphaGo will never do this. No matter what the opponent's situation is, even if they lose the game, AlphaGo will win the game relentlessly, because it can't do anything except play Go!

Know it, but do n’t know why

The current artificial intelligence is to summarize inductive knowledge from a large amount of data. This crude "induction method" has a big problem:

Ponzi schemes take advantage of this!

When we use logic to deduce this thing, we can conclude that the scammer:

Because the current artificial intelligence is based on "inductive logic", it also makes very low-level mistakes.

The image above shows the effect of a guitar on ps in a photo of a jungle monkey. This led the deep network to mistake monkeys for humans and mistake the guitar for birds, presumably because it believed that humans were more likely to carry guitar than monkeys, and birds were more likely to appear in the nearby jungle than guitars.

It is also because of inductive logic that it depends on a large amount of data. The more data there is, the more universal the generalized experience is.

The history of artificial intelligence

AI is not a brand new thing, he has been developing for decades! Below we introduce the most representative 3 development stages. 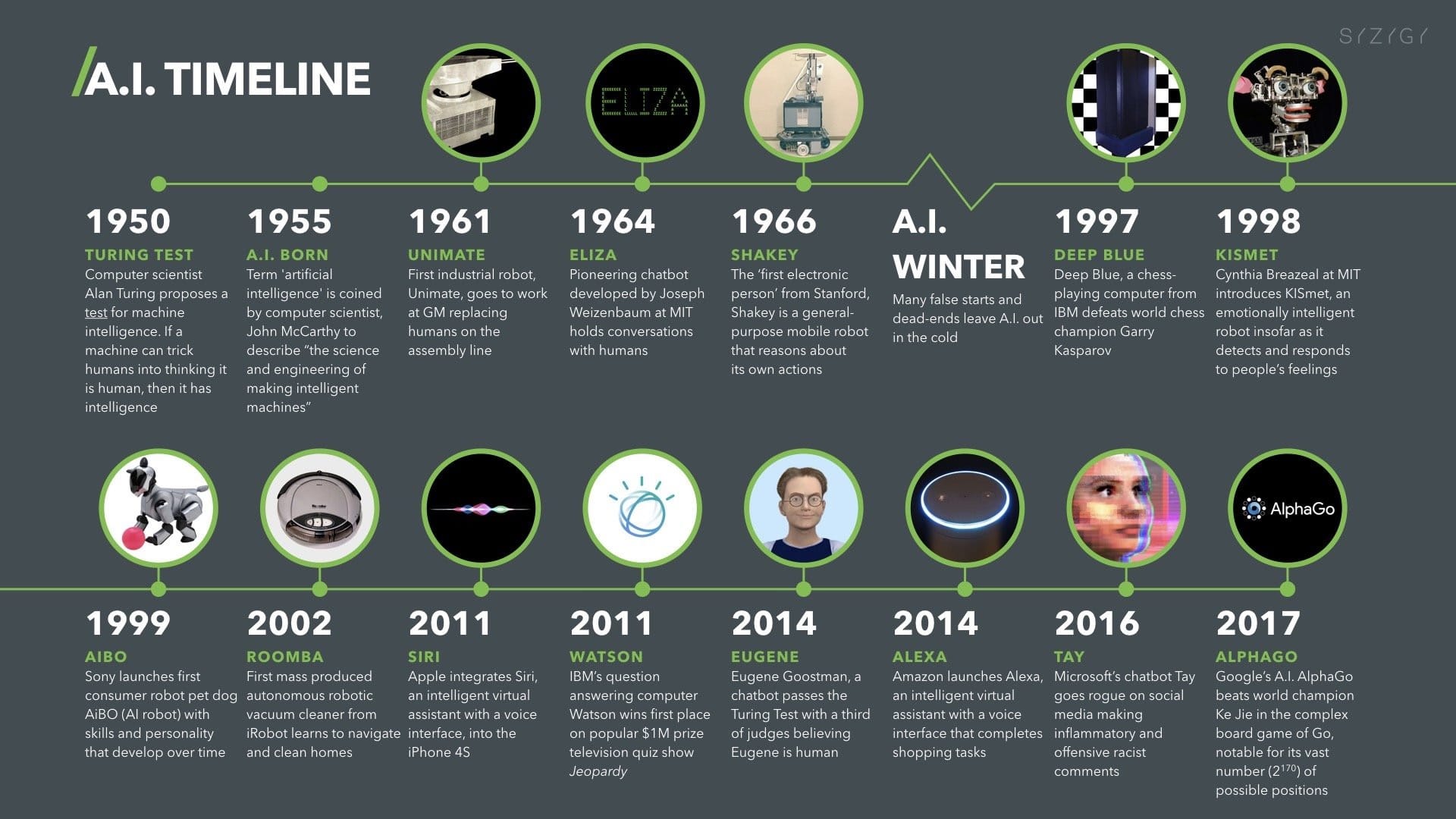 The above picture shows some milestones in the field of artificial intelligence from 1950 years to 2017 years. Summarized will be divided into 3 big stage:

The Turing test suggested that in a few years, people saw the "twilight" of the computer through the Turing test.

People of that era rated him very high, and some patients even liked to chat with robots. But his implementation logic is very simple, is a limited dialogue library, when the patient speaks a certain keyword, the robot responds to a specific word.

The first wave did not use any new technology, but used some techniques to make the computer look like a real person. The computer itself is not smart.

In the second wave, speech recognition is one of the most representative breakthroughs. The core breakthrough was to abandon the idea of ​​the symbol school and changed it to a statistical idea to solve practical problems.

In the book "Artificial Intelligence", Kaifu Li introduced this process in detail, and he is also one of the important people involved.

The biggest breakthrough of the second wave was to change the way of thinking, to abandon the idea of ​​the symbol school, and to use statistical ideas to solve the problem.

The 2006 year is a watershed in the history of deep learning. In this year, Jeffrey Sinton published "A Fast Learning Algorithm for Deep Belief Networks". Other important deep learning academic articles were also released this year, and several major breakthroughs were made at the basic theoretical level.

The reason why the third wave will come is that the 2 conditions are mature:

After the years of 2000, the rapid development of the Internet industry has produced massive data. At the same time, the cost of data storage has also dropped rapidly. It makes the storage and analysis of massive data possible.

Deep learning has developed a powerful ability after various conditions have matured. In speech recognition, image recognition,NLPThe field continues to set records. Make AI products truly available (for example, the error rate of speech recognition is only 6%, and the accuracy of face recognition is higher than that of humans.BERTThe stage of exceeding the human...) in the performance of the 11 item.

The third wave struck, mainly because of the big data and computing power conditions, so that deep learning can exert great power, and the performance of AI has surpassed human beings and can reach the stage of “availability”, not just scientific research.

The difference between the artificial intelligence 3 wave

To learn more about the history of AI, I recommend reading Kai-Fu Lee's人工智能", The content of the three waves above is excerpted from this book.

What can artificial intelligence not do?

When exploring the boundaries of AI, we can first simply divide AI into 3 levels:

What is the capability boundary of artificial intelligence?

If we go deeper and explain the boundaries of AI's capabilities from a theoretical level, we must move Master Turing out. Turing was thinking about three questions in the mid-30s:

Turing really designed a method that later generations called the Turing machine. Today's computers, including the new computers being designed around the world, are not beyond the scope of Turing machines in terms of their ability to solve problems.

(Everyone is a human being, how is the gap so big?)

Through the above 3 questions, Turing has drawn a line.This limit applies not only to today's AI, but also to future AI. .

Let's take a closer look at the boundaries:

Worried that artificial intelligence is too powerful? You think too much!

Will artificial intelligence make you unemployed?

This question is the one that everyone cares about most, and it is also the one that has the greatest influence on each individual. So come up and talk about it separately.

First, the replacement of "partial human behavior" by artificial intelligence is an inevitable trend

Every new technology or invention will replace part of the labor force:

The work of pulling a rickshaw-car

It should be noted that technology replaces only certain jobs. The digging machine can only help you dig holes, but cannot help you determine where to dig.

The same is true of artificial intelligence, which is not aimed at certain occupations or certain people, but replaces some specific labor behaviors.

Second, there will be better new jobs as you lose your job.

The history of several technological revolutions tells us that although the emergence of new technologies has caused some people to lose their jobs, many new jobs will also be created. The jobs that are replaced are often inefficient, and the jobs that are created are often more efficient. Think about pulling a rickshaw, then think about driving a car.

When artificial intelligence frees up a portion of the workforce, it can do more valuable and interesting things.

do not be afraid! Using AI well is a super skill

Two points were mentioned above:

What jobs will be replaced by artificial intelligence?

If a job takes less than 5 seconds to make a decision, then there is a high probability that it will not be replaced by artificial intelligence.

This work has four characteristics:

Scientists have identified three skills that are difficult to replace with artificial intelligence:

How to usher in the intelligent era?

Artificial intelligence will sweep the world like the industrial era. In this case, what we need to do is not to escape, but to embrace this change. Here are some specific suggestions for everyone:

The basic principle of artificial intelligence: Machines summarize laws from "specific" large amounts of data to form certain "specific knowledge", and then apply this "knowledge" to real-world scenarios to solve practical problems.

Based on this basic principle, there are three characteristics:

There are 3 levels of artificial intelligence:

Let's review the important changes in artificial intelligence in 2019:

What are the development trends in 2020?

More important milestones in 2019 and development trends in 2020 can be found in the following two articles:

'Important developments of artificial intelligence, machine learning, and deep learning in 2019 and trends in 2020 (technical articles)"

'Important developments of artificial intelligence, machine learning, and deep learning in 2019 and trends in 2020 (research)"

What is Artificial Intelligence (AI)? – Definition from Techopedia

What is Artificial Intelligence? In 5 minutes.(Need to be scientifically connected)

Don't put the myth of artificial intelligence, use the "HBI rule" to test whether AI is really suitable for your business?