Want to learn more NLP For related content, please visit the NLP topic, and a 59-page NLP document download is available for free.

Visit the NLP topic and download a 59-page free PDF 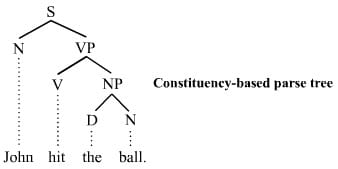 What is the compositional parsing analysis?

There are three basic tasks in syntactic structure analysis: 1. Determines whether the input string belongs to a certain language. 2. Eliminates ambiguity in lexical and structural terms in input sentences. 3. Analyzes the internal structure of input sentences, such as composition, context, and so on.

If a sentence has multiple structural representations, the parser should analyze the most likely structure of the sentence. Sometimes people also refer to syntactic structural analysis as language or sentence recognition.

Generally, constructing a syntactic parser needs to consider two parts: the formal representation of grammar and the description of the term information, and the design of the analysis algorithm. Currently widely used in natural language processing are context-free grammar (CFG) and constraint-based grammar (also known as grammar).

Rule-based analysis method: The basic idea is to manually organize grammar rules, establish a grammar knowledge base, and achieve the elimination of syntactic structure ambiguity through conditional constraints and checks.

Analysis method based on deep learning: In recent years, deep learning has achieved good results in nlp basic tasks, and many papers have emerged.

Select a central child node for each node in the syntax tree according to the central vocabulary;