What is a vector?

Size: The length of the arrow indicates the size

Direction: The direction pointed by the arrow indicates the direction

Lowercase English letters for general printing (a,b,cEtc.), handwriting is indicated by adding an arrow (→) to the letters a, b, and c, such as 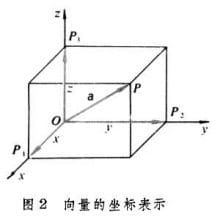 Of course, for multi-dimensional space vectors, it can be obtained by analogy.

These 4 concepts are constantly rising in dimensionality. It is easier to understand the metaphorical explanation with the concept of point-line polyhedron:

'Understanding scalars in one article"

'Understanding Vectors in One Article"

'Understanding matrices in one article"

'Understand tensor in one article"

In mathematics, vectors (also known as Euclidean vectors, geometric vectors, vectors) refer to quantities with magnitude and direction. It can be visually represented as a line segment with an arrow. The arrow indicates: the direction of the representative vector; the length of the line segment: represents the size of the vector. The quantity corresponding to the vector is called the quantity (the scalar quantity in physics), and the quantity (or scalar) has only the size and no direction.

The notation of the vector: the printed body is recorded as a bold (bold) letter (such as a, b, u, v), and a small arrow "→" is added to the top of the letter when writing. If the start (A) and end (B) of the vector are given, the vector can be denoted as AB (and added to the top →). In a space Cartesian coordinate system, vectors can also be represented in pairs, for example, xOy plane (2,3) is a vector.

Vector spaces (also known as linear spaces) are vectors that are called collections of objects, which can be added together and multiplied by numbers ("zooms"), so-called scalars. A scalar is usually considered a real number, but there is also a vector space where the scalar is multiplied by a complex number, a rational number, or usually any field. Vector addition and scalar multiplication operations must satisfy certain of the requirements listed below, called axioms.

Euclidean vectors are an example of vector space. They represent physical quantities, such as forces: any two forces (of the same type) can be added to produce a third sum of multiplicative force vectors from one real multiplier to another force vector. Again, but in a more geometric sense, vectors representing displacements in a plane or three-dimensional space also form a vector space. Vectors in vector space do not have to be arrow-shaped objects because they appear in the above example: vectors are treated as abstract mathematical objects with specific properties, which in some cases can be treated as arrows.

Vector spaces are the subject of linear algebra and are well characterized by their dimensions. Roughly speaking, it specifies the number of independent directions in space. The infinite dimensional vector space naturally appears in mathematical analysis. As a function space, its vector is a function. These vector spaces typically have an additional structure, which can be a topology, allowing for consideration of proximity and continuity issues. In these topologies, the topology defined by the specification or inner product is more commonly used because it has a distance between the two vectors. Especially the Banach space and HilbertIn the case of space, this is the basis of mathematical analysis.